There are several companies that specialize in marketing for for-profit companies who are now trying to build models for nonprofits based exclusively on customer data.

It doesn’t work. Here’s why:

A model built for for-profits can give you a very good prediction as to what consumers will respond to if they are given a coupon off their purchase.

What? Your nonprofit doesn’t have coupons giving you money off your donation? Oh, then perhaps an overall sale on donations would be more effective. Maybe a BOGO?

No to that too? Well, how about determining who would pay more for additional features and selling them an upgraded product? Or creating a stripped-down product that can be an economy version?

No products either… hmmmm….

And that’s where a system created for for-profits breaks down. In the classic marketing four Ps (product, place, price, promotion), nonprofits have only one: promotion. Thus, most of the levers a for-profit-based marketing mix would tell you to pull are unpullable.

Rather, nonprofits are “selling” a feeling – a warm glow that comes from doing something that resonates with our view of who we are and something that makes us a part of something larger than ourselves. That’s something that soap sellers, vino vendors, and overall product purveyors can’t do nearly as effectively.

You need a system and a model that works with the emotional levers you have at your disposal, not the product levers your for-profit sisters and brethren have available.

Product purchases and donations are substitutes.

Now, let’s say that you had the world’s best model for consumer purchases – you knew someone was going to buy something five minutes before they knew they were going to buy it, with 100% accuracy.

How accurate would that be in predicting donations? Not really at all. Because the thing that it’s good at predicting is a substitute for the thing we are trying to measure.

Consumer records are one part of a tapestry.

Even if you could get a consumer-based model to predict donations, it would still be working with one virtual hand tied behind its virtual back. That’s because it doesn’t have access to the single biggest variable as to whether someone will donate: are they the type of person who donates?

That’s why SimioCloud uses consumer data… alongside nonprofit donation data, interactions with the organization, demographic data, transaction and promotional records, and so on. Models improve when they have access to all types of data, especially those that are most predictive. So don’t sell yourself or your fundraising program short by using models that don’t predict donor behavior. 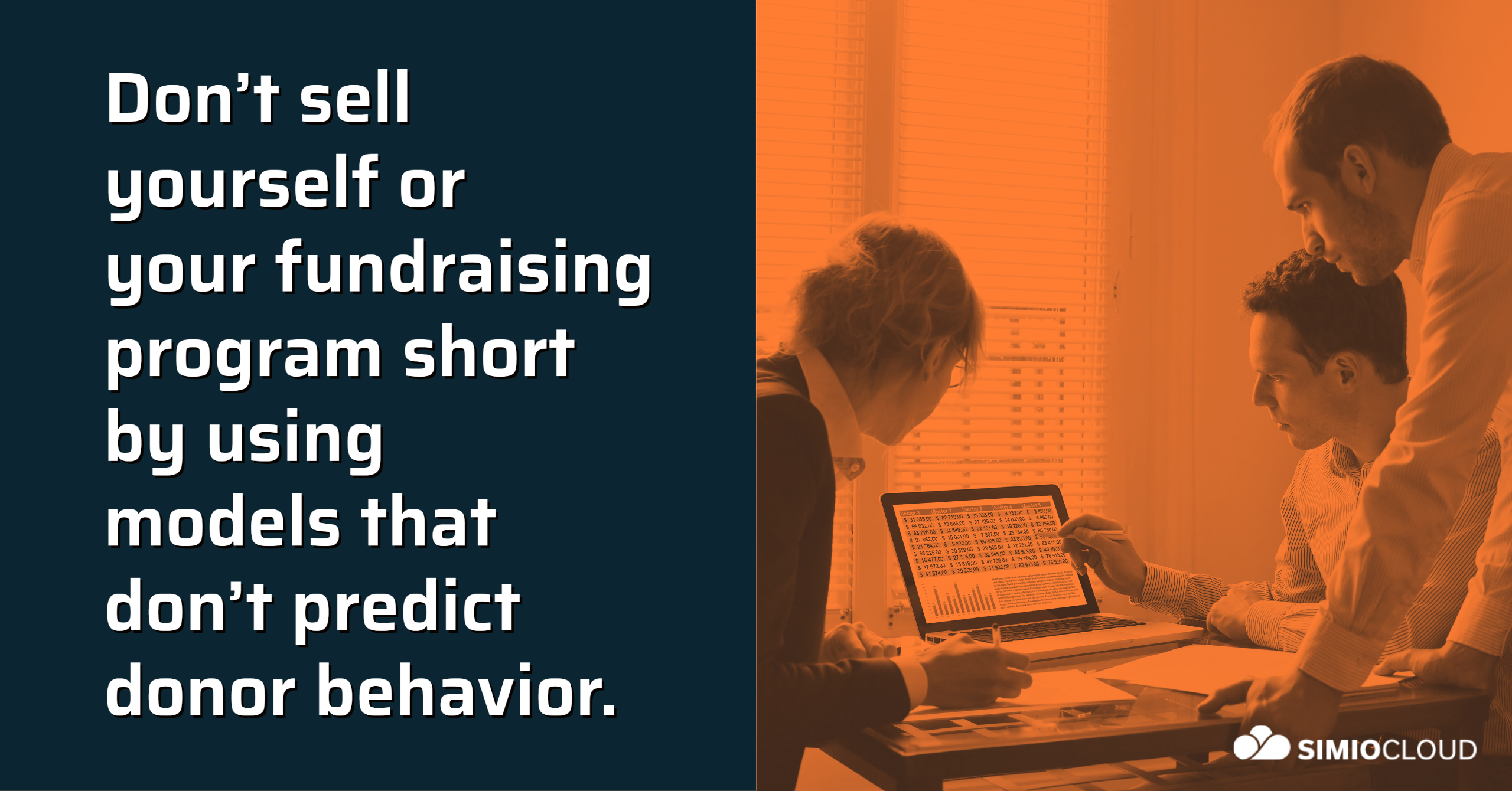 Back To Blog Home

If you have a question or would like to speak to someone at SimioCloud, please complete the form at the link below. You can also request a free consultation and/or quote.